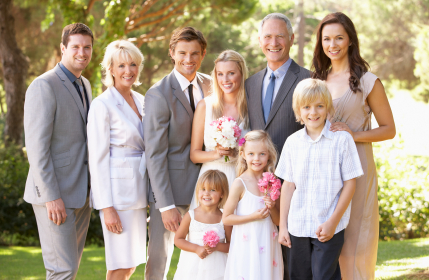 Weddings can be elaborate affairs or intimate, private occasions—but whatever the size or style of your wedding, your immediate family is often always involved (or at least invited). You might want them to be involved and most likely they will want to help – so what responsibilities might you delegate to them?

According to Emily Post, the famous American authority on etiquette, once noted that, "Marriages not only mark the united of a couple—they also involve the meeting of two families. Certain family members may be given specific roles within the wedding, but it is fine to assign roles—or not—to best fit your particular family."

With Ms. Post's suggestions in mind, the following is a breakdown of the traditional wedding roles & responsibilities of family members.

Mother of the Bride

The mother of the bride may help her daughter in many different aspects of planning, such as scouting out venues, managing the guest list, and finding the perfect dress. She traditionally has the honor of choosing her outfit before the groom's mother. The mother of the bride also attends the bridal shower and rehearsal dinner, and typically heads the receiving line at the reception.

Father of the Bride

The bride's father may co-host an engagement party with his wife. The father of the bride has the first pick on the engagement party date, if the groom's parents also want to hold their own party. The father of the bride is traditionally the one to escort her down the aisle (although this is not always the case). He may also give a special speech during the reception and have a dance with his daughter.

Mother of the Groom

Father of the Groom

The father of the groom traditionally hosts the rehearsal dinner with his wife. As host of the event, he kicks off any toasts given that evening. He may also give a speech at the reception and stand in the receiving line.

Grandparents often receive special seating at the ceremony and/or reception and are escorted down the aisle before the processional. They do not stand in the receiving line, however.

Siblings of the bride and groom may be asked to be attendants in the wedding party. They may also be asked to perform other duties within the ceremony and reception. Siblings typically attend pre-wedding parties and nowadays may even offer to host a bridal shower.

Children of the bride and groom should be told about the engagement first, especially if this is a second marriage for their parent. They should be asked if they would like to help with wedding preparations and be included in the ceremony in some way if they wish. Children's participation is optional, however; and they should decide the extent to which they will be involved.

If your family or families have experienced divorce, remarriage, step-relationships, or family feuding, give serious thought to these issues as early in the planning process as possible. Consider that divorced parents may not be on friendly terms. If they are to attend, seating should be adjusted accordingly so they aren't made to feel awkward or uncomfortable.